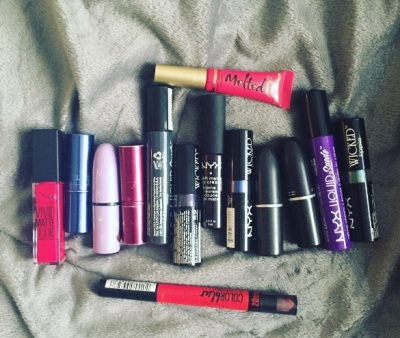 As a longtime lover of lipsticks, when I discovered liquid lipsticks, I pretty much lost my mind. I know that I was late on the train, but anything I can put on my lips without having to worry about lip liner is pretty much a gift from the universe. Add many of them being transfer-proof and long wear, and you have one happy camper.

And so, I was off to the races – matte, metallic, even glossy – give it all to me. However, to be totally honest with you, buying some of these lipsticks should not be as emotionally taxing as it has been. I had a brief love affair with one brand, even ignoring past wrongs (because everyone can change), but eventually got to the point where I couldn’t deal with the new drama almost every week, constantly rolling my eyes and asking why it has to be this way. Add that to a very public beef with another cosmetics mogul (whose record also isn’t squeaky clean), and supporting either company just wasn’t sitting right with me. Accusations of racism, using black women as props, extreme verbal abuse towards black women (or pretty much anyone who wasn’t caping for them), and other situations made it difficult to swipe on my pretty colors with awe. I like tea as much as the next person, but too much heat’ll burn you.

Then, there’s the cosmetics powerhouse with the products that sell out in mere minutes and are covered ad nauseum in every digital beauty outlet I can think of. Because the products are so difficult to order at times, beauty bloggers and vloggers across the web proudly boast their purchases, which honestly, I think is a pure result of supply affecting demand and not the other way around (just order more, geez). But products selling out isn’t the problem – I order plenty of products sitting and waiting with bated breath for the release to drop so my order will be sent out in a timely manner and ensure I get what I want. The issue is that the face of this company is yet another problematic person, surrounded by constant and consistent instances of appropriation with zero regrets. At this point, it’s basically trolling black women. Even today, I found myself browsing the site and slightly freaking out over a metallic lipstick, only to hop on Twitter mere minutes later and see some Grade A appropriating. Well, that certainly killed that craving.

In all honesty, I feel a little weird to care so much about the people behind the brands rather than the products themselves. But unfortunately, social media has caused a level of visibility that I don’t really want to see, but can no longer ignore. No one told me that buying lipstick would be this difficult.

**I know I didn’t specifically mention the brands, but you can probably guess who they are.